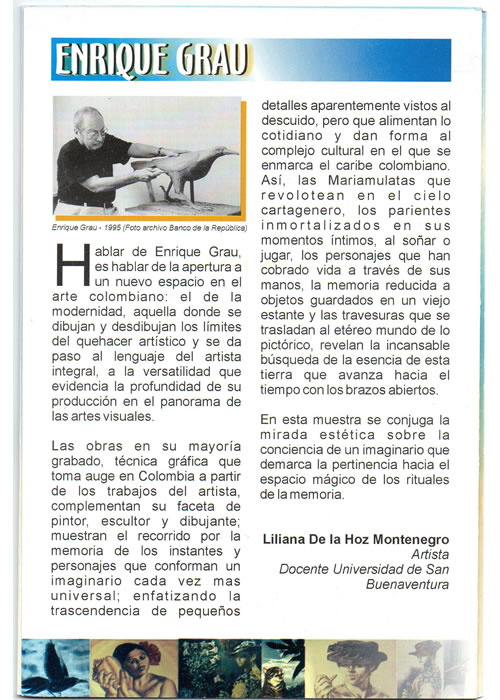 Speak of Enrique Grau, is talking about opening up to a new space in the Colombian art: the modernity, that where are drawn and blur the boundaries of the artistic endeavor and it gives way to the language of the integral artist, to the versatility that shows the depth of their production in the Visual arts scene.

The artworks, mostly engraving, a graphical technique that is expanding in Colombia from the artist's works, complement his role as a painter, sculptor and draftsman; show the journey through of the moments and characters that make up a more universal imagery; emphasizing the significance of small details apparently seen to carelessness, but that feed everyday and give shape to the cultural complex that is part of the Colombian Caribbean.

Thus, the Mariamulatas which flutter in the sky from Cartagena, relatives immortalized in their intimate moments, to dream or play, the characters come to life through his hands, the memory, reduced to objects stored in an old shelf and the mischief that move to the Ethereal world of painting, reveal the tireless pursuit of the essence of this land which move to the time with open arms.

This exhibition combines the aesthetic look on the consciousness of an imaginary that demarcates the relevance to the magical space of rituals of memory.